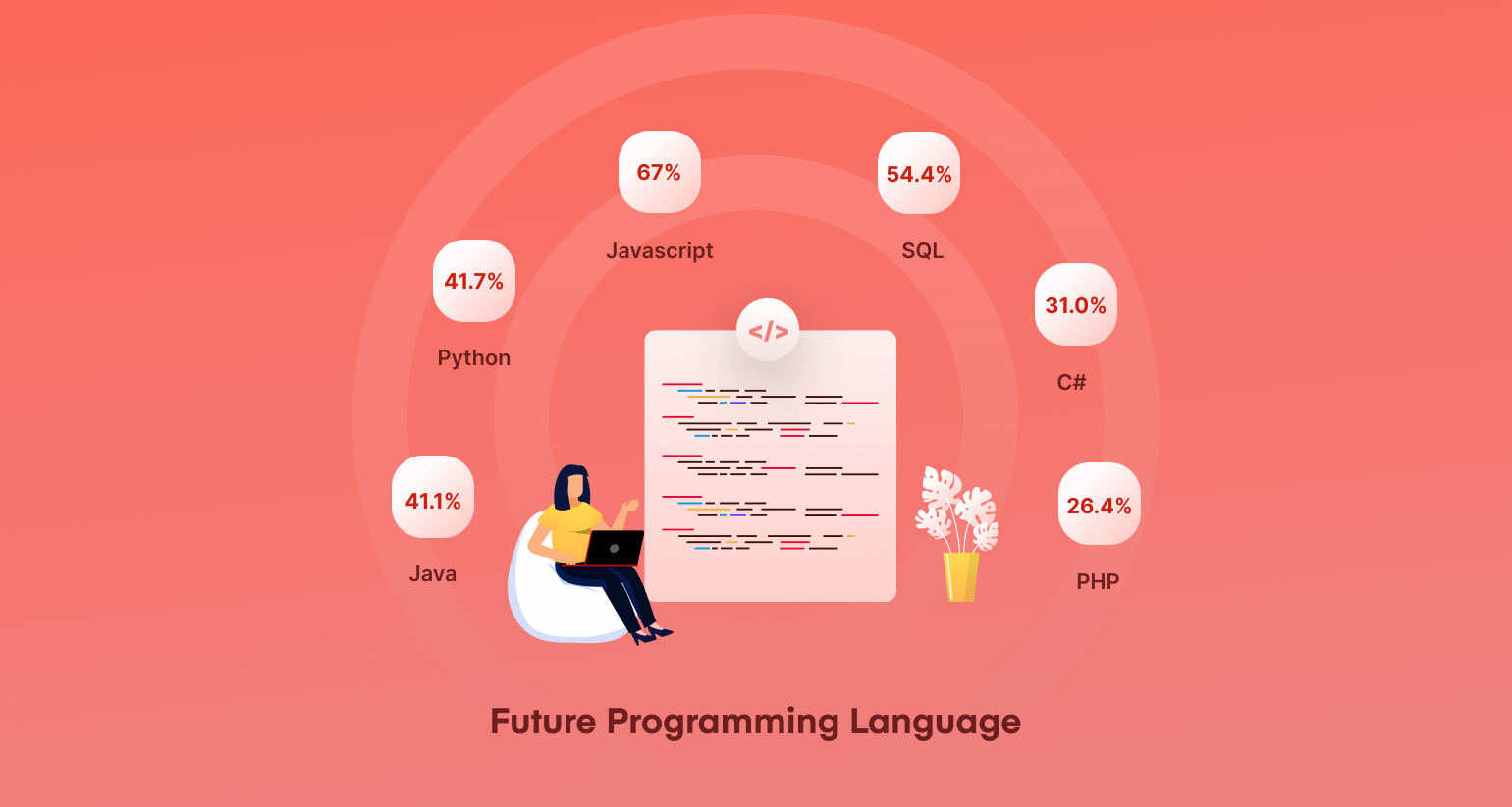 What is the Future Programming Language? 8 Code Languages for 2030

These factors have affected the programming industry and made this a lucrative career option for the young generation. According to a survey, programming jobs will increase in demand by 21% in 2028.

What is the Concept of Future Programming Language?

We can describe programming language as a concept of communication humans use to instruct machines to do specific tasks and follow different rules.

Every language has a different coding syntax, which programmers use to create specific programs. The difficulty level of a language depends on the coding syntaxes and rules. To write good code, developers must follow the best practices for programming.

One good example can be Python. In 2020, Python was stated as the first primary language by 80% of programmers globally. One of the reasons for its massive usage is the extensive libraries that facilitate data science, machine learning process, and AI.

After the pandemic, programming-related jobs are booming rapidly. The 2022 job market has been programmers, and developers are exceptionally better than other tech-related jobs.

Companies are hiring more programmers in 2022 than in 2021, and this increase in growth will continue. According to BLS (Bureau of Labour Statistics), overall employment in programming-related jobs will increase by 13% starting from 2020 to 2030.

Moreover, they also projected that the growth rate of technology employment will be 8% faster than other general occupations.

U.S.News declared that, In 2022, software programming is ranked #2 in the best technology jobs category. ISA (Information Security Analysis) takes the #1 spot in this list. However, the projected jobs for this post are not even 1/3 of software engineer posts, which is 409,500.

Based on the above facts, we can assume that programming jobs will be a great career choice and continue to do so.

However, not all fields in the programming section will be increasing. BLS predicts that there will be a 9.9% decline in the computer programming field, which is 18,300 jobs.

9 Qualities a Futuristic Programming Language Should Have

Bellow, you will see some of the most crucial qualities a futuristic programming language should have,

#1 Simplicity: It has to be simple, human recognizable, and easily understandable. The simplicity of a language will make the learning process faster.

#2 Abstraction: Programming languages need to have abstraction, which is the ability to define complex code structures, and the degree of usability comes.

#4 Suitability: A well-structured programming language is suitable for application and game development.

#5 Include in Community: It has to be well-recognized and has a community of developers.

#6 Efficiency: Programming languages need efficiency, so they can efficiently convert machine codes and consume less memory while executing the task.

#7 Testable with Tools: A programming language should ensure tools to test, debug, maintain, and develop.

#8 IDE: Programming languages should have an IDE (Integrated Development Environment)

8 Programming Languages that Will be Must-to-Learn Before 2030

These 8 languages will remain the perfect all-in-one programming languages suited for every type of work and environment.

After being originated in 1995 by Sun Microsystem, Java has performed incredibly well in all popular operating systems. The best part about Java is that developers can write code and run it anywhere.

Java is also a popular programming language among developers. According to Statista, in 2021, JavaScript was the most used language by developers. 64.96% of programmers use JavaScript, and 35.35% use Java, which holds the 5th position. And this position is remaining pretty much the same in 2022.

This incredible popularity of Java is for its easy-to-use nature and simple functions. JavaScript is used for scripting web pages, adding effects, and executing complex actions on a website. Overall, it’s a website creation language.

Another language that has held its position as the best mobile application development programming language is C#. In 2000, C was developed by Dennis M Ritchie in Bell Laboratories.

C# is known for performing complex programming tasks, yet this language is more efficient and easy to learn than other object-oriented languages. C# is pretty much being used in every type of programming operation, like OS, mobile application, software, protocol stacks, database programming, python interpreter, and game creation.

Python is by far the most human-understandable language out there. Well, most languages use tons of punctuation marks in code construction, which makes the writing process hard, and the checking and debugging process also becomes difficult.

In Python’s case, developers made this programming language as human as possible. Every line of code in Python contains fewer punctuation marks and uses English words more frequently. You can execute your codes before compiling them, pretty similar to PHP.

Most Python codes are easily defined and visible to human eyes. As we said earlier, Python is also quite popular among developers from different positions. It also has a library bulk that is portable and compatible with the various operating systems.

For its versatility and ease of use, researchers predict that Python might be capable of becoming a universal programming language before 2030.

Compared to other languages, Kotlin is a new programming language that was launched in 2016 to interoperate with Java.

It is also pretty similar to Java code structures and type inference. Kotlin’s pre-written codes or libraries depended on the Java library. However, the main difference is that Kotlin’s type inference can make the syntax more concise than Java.

Kotlin is primarily an alternative to Java but has given the developer a more precise and straightforward coding experience. In 2022, Kotlin mainly serves in the android app, front/back-end web development, data science, and multi-platform app development.

In the case of popularity, Kotlin is still an underdog. In a 2021 report by Statista, Kotlin was ranked 15th with 8.32% of users globally. But, it only informs us that Kotlin has to go a long way to surpass its successors.

However, some information suggests that Kotlin is one of the fastest-growing programming languages along with Rust, Ruby, HCL, and Go.

The Apple operating system and its environment are different from other operating systems like Microsoft, Linux, and Ubuntu. Swift is a programming language specially designed for building apps for Mac, iOS, Apple TV, and Watch.

Swift is an open-source programming language created by Apple. One of the best benefits of Swift is that it makes every element of a coding array safe for the programmer by eliminating any unsafe classes of code.

Another feature of Swift is that it pre-checks every element. This feature includes the initialization of variables, overflow of any integers, and memory management. Every syntax in Swift is tuned, making the intent defining process easy.

PHP (Hypertext Preprocessor) is one of the most server-side scripting languages alongside Ruby, Julia, Bash, and Lua. PHP is pretty similar to Javascript.

The core difference is that the written codes in PHP are executed on the server and then sent to the client. This process ensures that the client always receives the result of the script but not the underlying code. With PHP, you can literally modify any HTML files in web server processes.

PHP is a pretty beginner-friendly programming language and has exclusive features for professionals.

PHP is often used for building websites with many dynamic and animation elements like a scroll, rotating header, content expandability, and dynamic imagery. Some further PHP uses are server-side scripting, development for desktop applications, and web applications.

Julia was originated in 2009 by Jeff Bezanson and Stefan Karpinski. Their idea was to build a free, open-source programming language that is fast, high-level, and interactive. And, it pretty much was successful in its mission.

One of the main reasons to choose Julia is its fast, efficient, and high-performance. In Julia, you can write on the platform instead of interpreting before. Moreover, this language has always been performing better than Python and Matlab in language design.

Julia is also becoming pretty popular among developers. Here are some data from Julia computing,

Based on these numbers, we can assume that Julia has a big increasing user community. What makes Julia unique is it is improving day by day. The current Julia 1.7.3 version offers incredible features like package management, metaprogramming, and profiling.

The pre-built binaries in Julia help a developer entirely create the same environment every time on different platforms.

R is one of the best programming languages for database analysis, graphic representations, and reporting. This language allows the programmer to create branches and loops through functions. For efficiency, R also integrates with other programming languages like .NET, C++, Python, and FORTRAN.

Another benefit of R is that it is well-developed and effective with many crucial programming elements like loops, recursive functions, and conditionals. R is pretty secure and has an adequate data handling and storage structure.

While writing codes in R, you will see some operator suites that can efficiently perform calculations on lists, arrays, and metrics. It also has a wide range of data analysis tools for the developer.

R provides the user with a massive library with interactive graphics and supports cross-platform operations. Some companies that use R as their primary language are Linkedin, Amazon, and Flipkart.

Finalizing on What is the Future Programming Language

These 8 selected languages managed to get a spot on the list because, in 2022, these top languages are performing incredibly better than any other programming language, and the flow of improvement will continue in the future.

However, it doesn’t mean that other languages are not so suitable as future programming languages. Besides the list, you can add TypeScript, Scala, Matlab, Go, Ruby, HTML, CSS, etc.

So, what do you think is best in every way? Let us know in the comments.

If you have any queries on the topic What is the future programming language, then don’t hesitate to ask. Our experts will answer every one of your questions.

Have a good day!

Adrita is a WordPress Blogger & Digital Marketer. Enthusiastic about producing content on challenging subjects. Besides, she loves to sing classical songs, watch movies, travel and read love stories. Apart from all of these, she fancies playing with her pet dog “Judy” & "Deany".