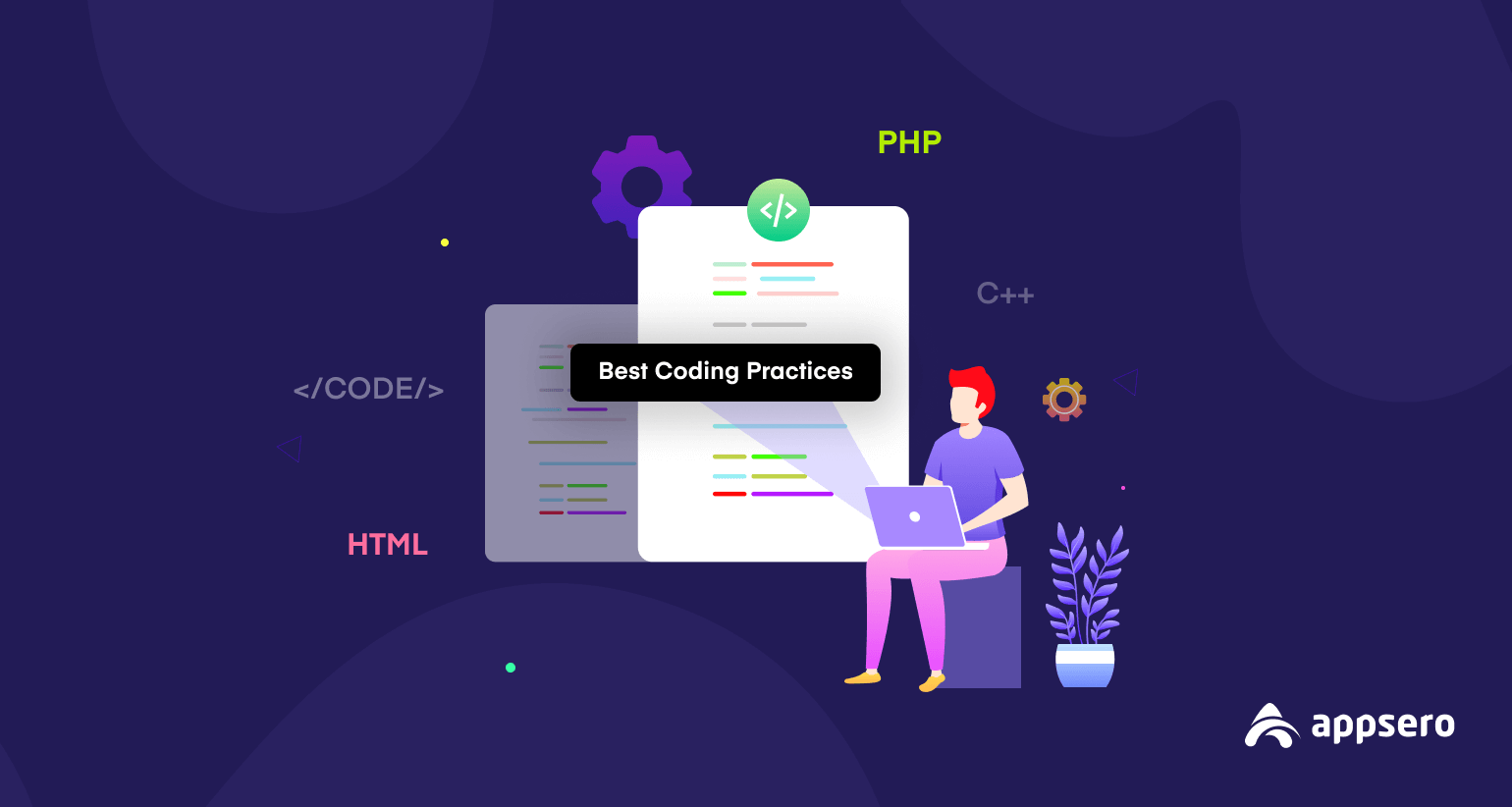 Programming has become an incredibly impactful career in the job market nowadays. But, for being an expert programmer and holding this position you have to be more tactical.

In any specific software-based project, programmers had to do the pillar works. Therefore, they had to be creative and perseverant. You can’t find any shortcuts in this work.

But, what if there was a way to make coding less hampering? Well, you can use best coding practices to ease your working process. Take these practices as a list of side tasks that you will do while coding.

What Is the Ideal Coding Standard?

In simple terms, a set of specific rules or practices to perfectly write lines of code can be described as coding standards.”

Coding standards should always have these qualities,

Many companies had their own specific coding standards for their employee developers. Do you know that Google developers have to be experts in abstract mathematics? In interviews, Google can ask any tricky mathematics question to the applicants.

Moreover, developers have to be experts in at least one programming language and have complete mastery over it. They prioritize better quality in one language than bad quality in many. Apart from that, they should learn what are the end-to-end good practices for easy smooth deployment.

Here is a comparison of standard and inadequate coding,

Humans are not faultless, and continuous writing will eventually lead to bad coding. In those cases, taking a break might help.

Programming is not an easy job, so any practice might not reduce your work dramatically but it will help you reach your desired objective faster. Especially assists to become an expert WordPress developer.

This article is represented by many veteran programmers and some of our own expert employees. So, don’t worry about the authenticity.

Different projects require a specific set of coding practices, and therefore it’s best to stick with that standard. Programming for a gaming company will be completely distinct from an automobile or operating system company. If the company launches different branches within the same name, then it may have similarities.

Mastering initiative-specific practices are the key to developing many crucial coding skills. Moreover, you can reach your desired results faster and help your fellow programmers help more sufficiently. The best part is you don’t even have to learn other programming languages if your job doesn’t require it.

Moreover, your code will be satisfactory for end-users and have all the specific business requirements. To make your job polished have some knowledge of essential developer tools.

One of the most crucial parts of coding is making it simple and understandable to you and your teammates. Writing a simple version of a complex code is almost like an achievement because both standards should lead you to the same result.

Here are some ways to keep your code simple, which should help you take less time and grant more space,

These practices should make your coding clearly understandable and errorless.

Your different coding headers should maintain a similar format. Consider these points while you write your headers,

3. Put comments in your code

In group projects, it’s easy to make any mistake or not be an expert in a precise area. Moreover, your point of view about a specific coding will not be the same as others. One interesting fact is, after sometime later, the developer himself may not have the same logic about programming.

Commenting in code will make this logic difference an advantage in a group project. When you put comments in a code, you create an awareness zone for others who work later in that project.

Your comment should explain the code snippets. Comments are actually small messages to inform other developers who will check the same project later.

Sometimes a comment can save an entire project from being destroyed. Moreover, code comments play a vital role for beginner programmers. They can learn and help to teach them any logic behind a code.

So, make sure to prioritize commenting.

4. Request a review or test run of your code after you are done

It’s normal for a human to make mistakes and make them later. However, doing a debugging process on your own after a failed attempt sometimes may not be 100% accurate

That’s why you may have mistakenly gone through the same mistake over and over again. However, that doesn’t mean that someone else will not see the same mistakes. So, in programming, it’s best to show someone your code, and they might find that one annoying mistake you’re repeating.

When your code is reviewed by a new person they are actually not only finding a problem but also suggesting an edit. This review may prevent a significant issue from happening in the future.

Peer review is considered a must for big projects where hundreds of people are working. One slight mistake in the code can destroy the entire project and put the work in jeopardy. Later, you have to put more effort, which can entirely be solved by someone else. In this case, you can rely on software testing reports from QA Team.

Moreover, that’s not the only issue you might have while coding. We are talking about device malfunction, dead battery, and internal hardware damage. Once one of the events occurs, you will lose all your work and go through hell all over again.

Back up your current working progression every time after a modification. Make it a habit. You can choose a version control mechanism like TFS, SVN, etc.

However, there is another option you can try that will back up your progress automatically. Yes, you guessed right, cloud-based code editors are becoming pretty popular these days. They offer-

It’s more like a social media type of thing for only programmers. You can check out some pretty popular platforms like GitHub, CodeSandbox, Raplit, AWS cloud9, and JetBrains.

In the “Write Visible Clear Code” section, we already told you to name every convention in your specific programming language. Here are some reasons why you should do it.

Understanding a code’s purpose in less time is readability. Naming conventions will make the code string easier for other developers to understand.

They will figure out the purpose faster and make necessary decisions more frequently. On average, a developer reads more code than writes.

Naming any code element like a variable, method, or field will sort it out. Later, you don’t have to return to these fields and fix them all over again. All you need is to figure out a good name.

Many programmers think debugging is not actually part of the coding process, and therefore they don’t pay heed to them. They are the ones who suffer from debugging issues more often than other developers.

Effective debugging makes code readable to others and creates a final finishing project. Humans always make mistakes, that’s why there is no code in existence that didn’t go through the debugging process.

When writing your code, you will always find yourself solving many problems. Imagine how hard the problem-solving will be without any actual idea of how to proceed.

Try out every possible solution to the current problem until you fix it. In the debugging process, having strong willpower is the most important.

Question: What is the term “indentation” in coding?

Answer: Indention is the vertical empty space after every line of code. In most programming languages, indentions are not significant and only increase readability. However, the same doesn’t apply to Python. In Python, indentions mark blocks of code.

Question: What are the 3 essential qualities of writing code?

Answer: These 3 qualities are a must for every level developer when writing code,
– Clear design
– Clear purpose
– Clear code

Question: What is CODER?

Question: How to recognize good code?

Answer: There are 3 categories that indicate good code,
– Human-understandable.
– The code’s intentions are clear to an outside programmer.
– Reading the code takes less time than writing the code.

Question: How much do programmers make per hour?

Answer: A software developer in America earns $35 an hour and over $70,000 yearly. To have a wider view click on- Developers Early wages.

Take programming as a game, but it’s not a single-player game. It’s more like a team game, where you can gain extra gaming valuables if you take help from your friends.

Sharpening your skills by adopting the above practices will make you feel like a game when you are doing it with developers. You will become a pro in less than your expected time and hold your skills almost forever.

In the world of code, writing visibly clear and understandable code for others is an essential achievement for any programmer.

If you are new to coding, here is a small tip. You can start your journey from coding Bootcamp, Udemy, or Coursera. Take online classes, meet with other developers, and learn from veteran programmers.

If you have any other queries or anything to add about best coding practices, then do let us know in the comments below.

Adrita is a WordPress Blogger & Digital Marketer. Enthusiastic about producing content on challenging subjects. Besides, she loves to sing classical songs, watch movies, travel and read love stories. Apart from all of these, she fancies playing with her pet dog “Judy” & "Deany".