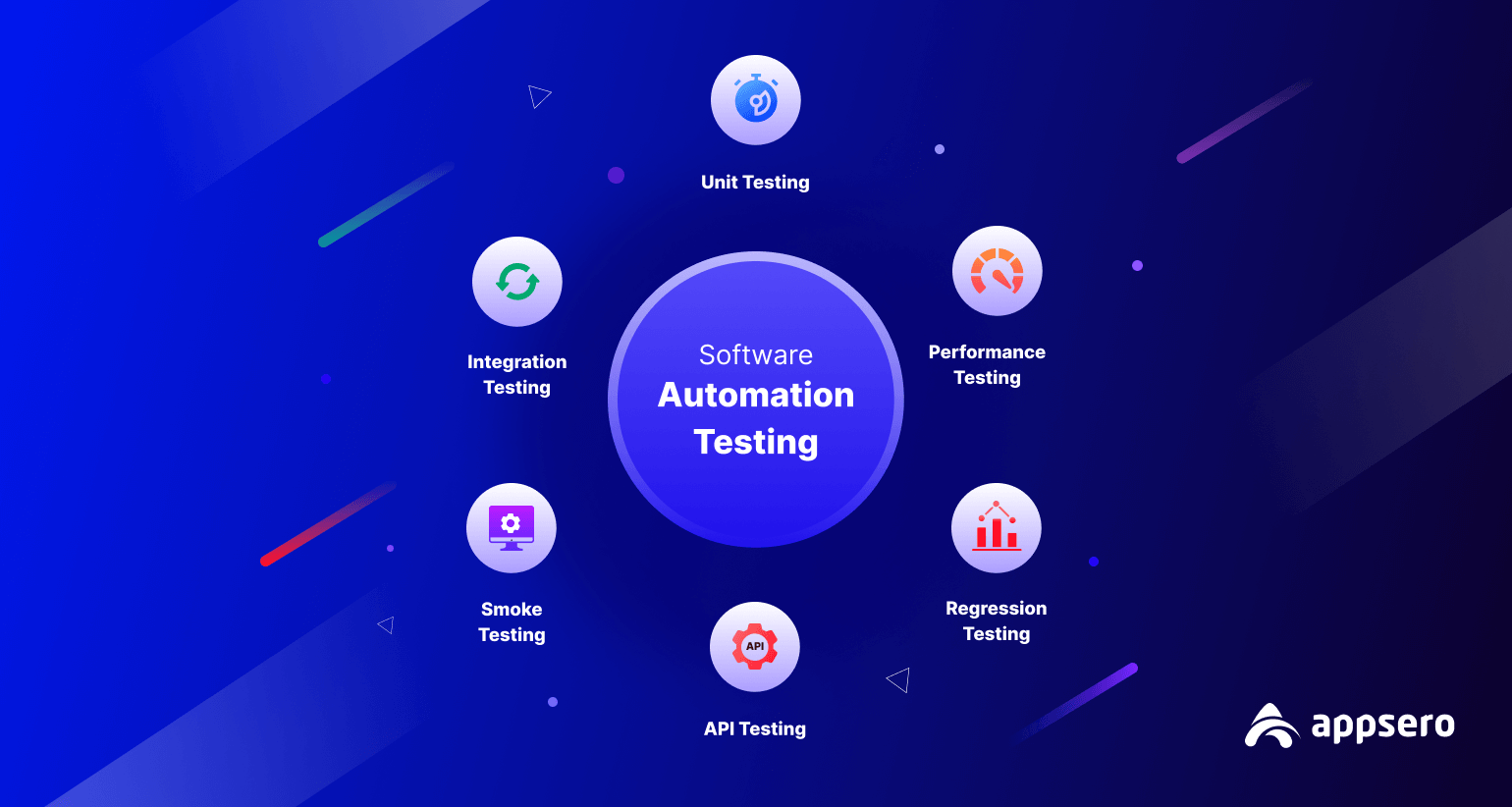 Most tasks related to software testing are repetitive, time-consuming, and boring for a human. Manual automation testing, with human intervention, is more likely to be affected by human errors. Automation testing comes to the rescue to eliminate such risks and relieve the testers from the burden of performing mundane manual testing tasks.

With the development of AI and machine learning technologies, test automation has become an integral part of software QA. Different applications or software call for different types of automation testing. No matter what kind of automation test you run, an effective tool can generate almost 100% accurate reports for you.

In this article, we’re going to discuss what is automation testing, its benefits, its major types, and the best automation tools. Keep reading to learn more.

You can navigate to the main points from the below table of contents.

What Is Automation Testing?

Manual testing requires humans to sit in front of computers and carefully execute each step of the testing process. This type of mundane task is often associated with significant human errors. Automation testing is more efficient because it keeps the errors to almost zero.

How Test Automation Can Benefit You

The best use cases of test automation are- it automates repetitive tasks and renders more accurate results than manual testing. Moreover, you can run both functional and non-functional testing with the right kind of automation testing tools.

Test automation has a lot more advantages to offer. The following list will help you understand how automation testing can benefit you.

11 Types of Automation Testing for Software

Automation testing is mainly of two types- functional and non-functional. Functional tests deal with the real-world application of a software solution. It determines if an application works properly.

On the contrary, non-functional automation testing tests the performance, usability, and speed, and monitors the efficiency of the software. It determines how well the program works.

Unit testing is the initial step of the automation testing process. It ensures that the application runs hand in hand with all integrated tools. Each application comes with multiple components that are supposed to work perfectly as an individual unit. Unit testing deals with those components as isolated units and tests their functionality.

Upon successful testing, these small units are integrated into the application to form the whole. Once all components qualify at this stage, they are assembled together for the next testing step.

Integration testing focus on testing different modules and units of the application as a whole. It figures out whether all integrations of the software meet the functional requirements of the solution.

This testing process studies how each integration interacts with the other. You can easily detect any conflicting issues available among multiple modules and extensions of the software.

Smoke testing is also known as Confidence Testing. It’s called smoke testing because this test ensures that the program is safe to be tested further without involving the risk of catching fire.

Smoke tests determine if the software is stable and functional. The application should be sent back to the development team if it doesn’t qualify in this phase.

API aka application programming interface allows a component of the application to access data and interact with other external components. A successful application needs to have seamless access to all required components. API testing finds out if the APIs are properly synchronized and working fine as they should.

This test makes sure that an application is rightly updated with new features, functionality, or codebase. Whenever any changes are made to a program, regression testing comes into play. Regression testing determines if the new change makes the application perform as it is supposed to.

If the program behaves the same way before or downgrades to a previous version, then it is called regression. Regression tests are relevant whenever there is any change in coding.

Usually, each test case runs on the basis of a set of data stored separately in a table or spreadsheet. Developing a new set of data every time is waste of time and resources. Data-driven testing implies the use of the same data for multiple test cases. It eases this process by facilitating the reusability of code.

Performance testing is conducted once the development process is done. It involves determining the software’s stability, speed, responsiveness, and functionality under a heavy workload. It focuses on finding out the bugs and hurdles that hamper the performance.

Performance testing helps developers understand how well their product works. The product goes back to the development process if any issues get detected throughout the testing process. Then they can troubleshoot to figure out a problem and find its solution. Thus, a product becomes marketable to its target users.

As the name suggests, security testing involves everything related to the vulnerability of the application. It finds out if the program is susceptible to security threats. It focuses on finding the weaknesses and helps developers remove the exploitability to build a better application.

The aim of building a product is to cater to the needs of its end users. Acceptance tests work with this section of the development process. It tries to predict how the end-users may react to the release of the application. A high acceptance level means the program is likely to gain popularity among the users.

1. Ranorex- solutions for every industry

Ranorex is best known for its ability to conduct UI tests, regression tests, data-driven tests, and more. It’s easy to use with a click-and-go software interface. This tool is suitable for almost all platforms including desktop, mobile, and web. You can easily enable software testing automation with Ranorex.

Avo Assure lets users test complex applications with a no-code automation solution. This tool performs 85% faster than manual testing. It supports almost all technologies including web, mobile, desktop, Oracle, SAP, and more. It has more than 1500 keywords in its dedicated keyword library.

Mabl is the most suitable for a fast-paced testing environment. It allows multiple team members to work together through the cloud-native platform. Mabl comes with powerful AI that can produce in-depth reports and cope with the changes made in the software throughout the development process.

5. Selenium- a suite of tools for automating web browsers

Selenium is the best tool that can automate web applications for testing purposes. It can perform browser-based regression automation testing across multiple environments. Its automation suites support bug reproduction and work great for a wide range of programming languages such as Java, Python, C#, and more.

Katalon works on open-source frameworks, making it easier for testers to run tests and generate reports. It is a complete automation testing tool that supports web, mobile apps, and desktops. It is also compatible with all major operating systems like iOS, Windows, and Linux. It offers a no-code experience for beginners and advanced testing extensions for experts.

testRigor is one of the best software testing tools when it comes to AI-based automation. All data are shown in English and are easily intelligible by humans. It supports mobile browsers, apps, web, APIs, and cross-platform testing.

Things to Consider When Choosing a Test Automation Tool

The results of an automation testing tool determine the functional and non-functional quality of your application. You will get the wrong guidance if the tool is not reliable. Besides, the maintenance cost, efficiency, availability of support, number of features, etc. are a few things you should consider when choosing a test automation tool.

Here’s a quick list of the points you should keep in mind to make a well-informed decision when selecting the right tool for you.

Choose a Framework to Manage the Automation Testing

This is the simplest approach and works best for a comparatively inexperienced and small team. The linear framework is also called Record and Playback model.

You need to write simple test scripts to run each test case. This type of framework used in software automation testing doesn’t involve any sequential steps or modularity in its mechanism.

The modular framework fragments the test scripts into small, individual modules. It allows the testers to create multiple test cases and test the independent modules efficiently.

The modular-based framework is very effective but it requires a great deal of planning and background work. It’s an ideal approach for testers who have significant experience in using automation testing tools.

This is a more advanced and larger version of the modular-based framework, but there are a few differences. Under this system, the tasks are put together in the larger test script in a way that meets their goals. Tasks with similar objectives fall into the same group.

These functions are kept in a library for further reference. The testers can quickly access this data whenever needed. This is a flexible framework. However, you initially devote a significant amount of time to organizing the library.

FAQ on Types of Automation Testing

What is automation testing in QA?

Quality assurance refers to testing the quality of apps and software via web and mobile testing. Automation testing removes the repetitive, complex, and time-consuming tasks from the QA process. This automation testing in QA happens with almost no intervention from humans.

Are there any disadvantages of automation testing?

Yes, automation testing often comes with a few challenges. It might take longer to develop the test scripts. Sometimes, the process is so complex that you must employ an expert to pull out the testing process. Automation testing also requires high initial costs to implement the system.

In manual testing, the test cases are performed by a team of humans without any AI support. But, automation testing involves the use of tools and scripts to execute test cases

What are the steps to conducting automation tests?

The basic steps to running an automation test are as follows:
1. Select a suitable testing tool for your needs
2. Determine the automation scopes within your applications
3. Plan, design, and develop a workflow to run the tests
4. Execute the tests with great attention to detail
5. Document and manage the reports for further use.

The year 2021 has experienced noticeable growth in the development of codeless test automation tools and the use of artificial intelligence and machine learning in testing. The same trends are expected to continue in the coming years.

“Although some want to ignore it and some embrace it, artificial intelligence for software testing is now a ‘thing,'”

According to a study, almost 90% of respondents said that they are planning to integrate testing with AI into their organizations. 80% of them wanted to increase the use of AI-based trials in their automated testing processes.

Automation in software testing is gaining momentum with new features like self-healing and more integration with popular tools. But, it’s still a challenge to achieve positive ROI from automation testing because of the maintenance cost and longer test creation period.

However, software automation is evolving every day. We can predict that sooner you’ll be able to run different types of automation testing by using a cost-efficient automation tool.

Md. Tanvir Faisal is a Technical Content Writer at Appsero with 4 years plus experience in Content Writing, Copywriting, Proofreading, and Editing. He focuses on writing informative content that draws social media attention and enhances search engine visibility. To date, he has successfully developed useful content for many websites across all formats.