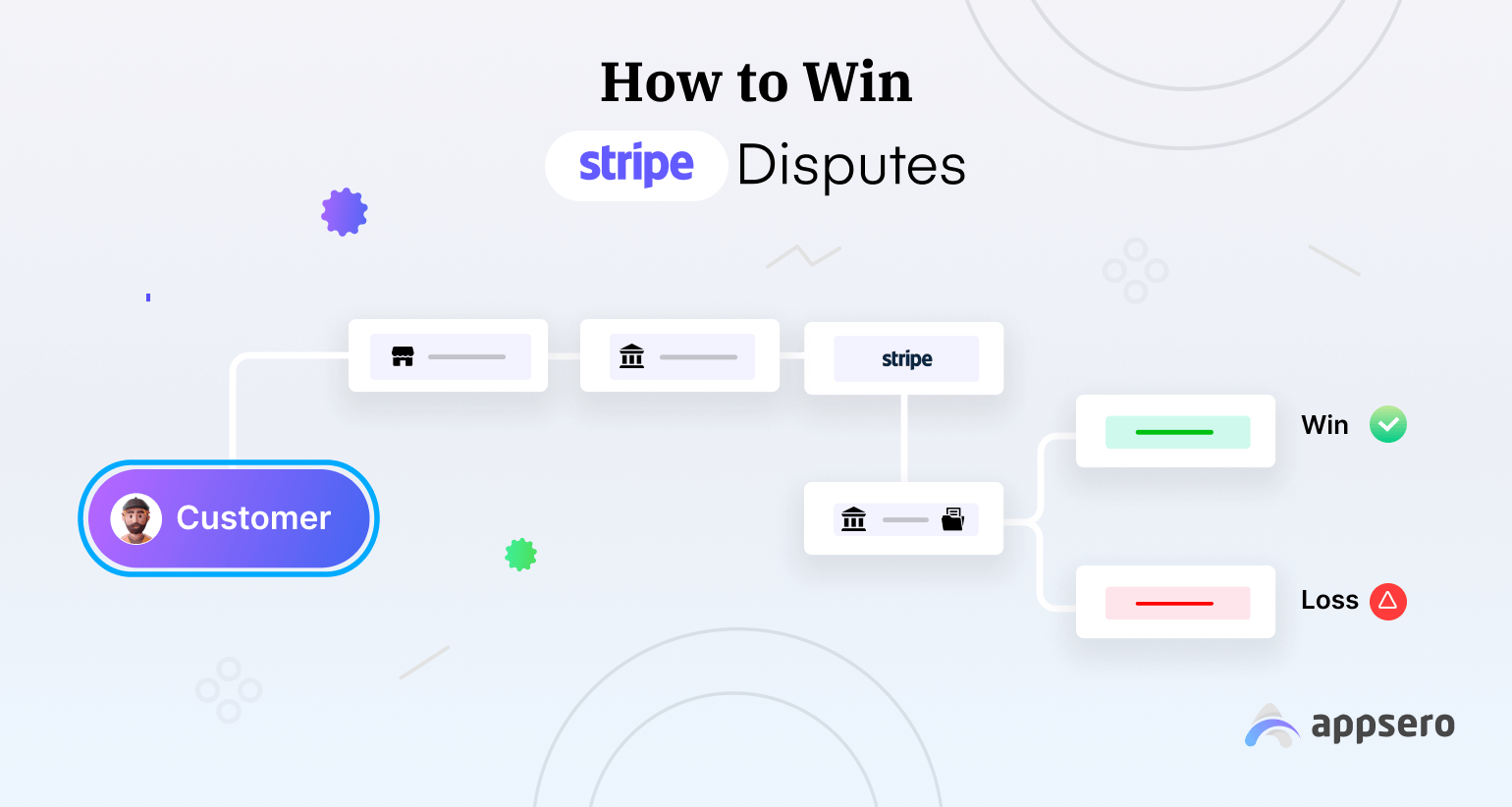 Stripe is one of the most popular online payment gateways with a $95 billion valuation. It’s becoming more popular each year with both online merchants and customers. However, one particular issue that online merchants are always at risk of facing is “Stripe disputes”.

You have less control over such disputes as a merchant or developer who sell WordPress plugins and themes. That’s because once the customer claims a dispute, then Stripe interferes and facilitates the case. All you can do is try and avoid the chargebacks whenever a dispute comes your way.

In this article, we’ll guide you through the ways to fight and win Stripe disputes like a pro. But, before that, let’s know what disputes mean and how Stripe processes them to reach a conclusion.

What Does Dispute Mean in Online Transactions?

A disputed online transaction refers to the case when a cardholder doubts the validity of a fund transfer made through his debit card/credit card or bank account. Usually, the customer contacts their card issuer bank and claims their money as per the dispute policies of the respective financial partners. Then the merchant (in our case, the developer) either accepts the dispute or shows evidence against the complaint. Finally, the cardholder’s bank reviews the evidence and decides who wins.

What is a “Stripe Dispute”?

Stripe disputes are also known as chargebacks. A stripe dispute occurs when a customer places a formal complaint on the card network against a payment. Upon receiving the dispute, the card network (such as Visa, MasterCard & American Express) instantly reverses the payment in question. It pulls the transferred money back and charges dispute fees where applicable.

Stripe comes into the scene at this stage. It debits your balance with the dispute fee along with the payment amount. It will help you facilitate the dispute management process by providing clear guidelines within the user Dashboard. You can submit your evidence to fight the dispute by navigating through your Dashboard.

Every card network has its own codes that specify different types of dispute claims. Many of these codes from different card networks match each other. Stripe groups all dispute codes into eight dispute categories and deal with the codes effectively. The eight categories are as follows:

How Do Stripe Disputes Work

The Stripe dispute investigation process varies a little bit based on the card networks. But almost all card networks follow a standard pattern as shown below.

When a cardholder applies for a dispute with his bank, it retrieves funds from the linked Stripe account. Stripe informs the account owner about the dispute via the Stripe Dashboard, webhooks, email, and the API. It then debits the disputed amount from the developer and assesses a dispute fee. As a developer, you’ll get the chance to submit convincing evidence to fight the dispute.

You can take three types of action in the face of a dispute. You can:

The last two options will lead you to lose the money as the cardholder’s bank will not return the fee and charge.

If you submit supporting evidence to encounter the dispute, the bank will review the evidence and decide based on the submitted documents. It usually takes 60-75 days for the issuers to evaluate the evidence and provide an outcome. You will get the fee and the charge back if the bank overturns the dispute.

The cardholder’s bank upholds the dispute and you lose the money if the evidence is not good enough to counter the dispute on your behalf. That’s why you need to know how to win stripe disputes. The following section covers the best practices of winning a stripe dispute like a pro.

The best way to win a stripe dispute is to respond to it as soon as you get notified about it. You can mitigate the number of disputes by employing prompt customer service. However, here are the proven ways to win Stripe disputes. Keep reading to know how you can prevent monetary loss due to disputes.

Most card networks allow their account holders to initiate a dispute within 120 days of the original payment. Some situations call for an extended period. For example, if a customer plans a future vacation event and buys air tickets or hotel reservations in advance, the time starts on the due event date, not on the date of payment.

The whole lifecycle of a dispute, from initiation to final decision, usually takes 2-3 months to produce an outcome.

However, you will get only 7-21 days to respond to the chargeback depending on the cardholder’s card network. Keep a close eye on the deadline. You’ll be notified about the time limit when a dispute arises. Missing deadlines means losing the dispute.

The card issuer banks and Stripe authority get a good number of disputes each day and that keeps them busy. So, avoid irrelevant details about your company or complaints against the customer. Instead, present compiled evidence and provide facts that nullify the dispute in question.

Stay neutral and professional when submitting the evidence. Don’t let your emotions carry you away from data-backed evidence. Keep the following things in mind.

3. Prove That the Customer Authorized the Transactions

Most of the Stripe disputes fall under fraudulent cases. If the cardholder can prove that he didn’t authorize the transaction, you’ll get a minimal chance to win the dispute. Prove that customer himself knew of the transaction and authorized it from his end.

You can show the following set of proofs that work as strong evidence to counter fraudulent Stripe disputes.

4. Provide Evidence That You Delivered the Product/Service As Promised

Another common ground of Stripe dispute includes issues related to product delivery and quality. Customers may claim that they never received the product, the product quality is unsatisfactory, they got the wrong product, or the received product doesn’t match the product description.

You should prove that you delivered the right product to the exact address provided by the customer. Provide shipment proof that has a complete address along with the receiver’s signature. And, if the shipping address differs from the billing address, clarify why it is so.

If you sell digital or downloadable products, then the process is different. Provide evidence like a system log, or IP address that proves that the customer downloaded the content or piece of software you sold.

As a plugin owner, you should have well-crafted terms and policies that define your standard operating procedure when confronted with multiple issues. They should contain clear statements about critical issues like refund requests, disputes, and other terms of service.

Make sure you have proof that your customers agree to your terms and conditions before checking out. Show it as a piece of compelling evidence. This will help you manage the disputes in alignment with your policies.

Your submitted evidence must be easy to understand and navigate for the evaluators. Keep the text lucid and images clear. You can use the following tips.

Visa, Amex, MasterCard, etc. card brands have their own algorithms to detect businesses running with a high dispute rate. On average, the acceptable dispute activity is below 0.75%. Anything more than that is considered excessive Stripe dispute activities. Such excessive chargebacks will affect your ability to use Stripe to a great extent.

Stripe developed machine learning technology to predict potential disputes and alert the account owner to identify the threats. You should take these alerts into account as a top priority and create preventive measures.

Also read: How to Win a PayPal Dispute.

Though, you have nothing to do with some types of disputes. Some card networks have unchallengeable disputes under their rules. Stripe immediately marks them as lost and you have no chance to submit evidence in your favor.

FAQ About How to Win Stripe Disputes

What if I accept the dispute as a seller?

You’ll lose the dispute instantly once you accept a dispute.

Does Stripe charge for chargebacks?

Yes. Stripe charges the developer a 15 USD dispute fee for a lost cause. It refunds the disputed amount along with the fee to the merchant account if he wins the dispute.

Can I overturn a lost dispute?

No, you can’t challenge a decided dispute. Even the customer can’t overturn the final decision if it goes in your favor.

How long do Stripe disputes take?

Stripe uses a well-guided Dashboard and an API to submit, monitor, and complete the review process. It takes 30-90 days on average to decide an outcome.

Can I sue Stripe for holding my money?

Yes, you can. But make sure it’s not your fault that Stripe is holding your money or charging you more than you should pay.

Yes, you can. Follow this guide to know the process- How to Add Stripe to WordPress for Selling Plugins and Themes with Appsero.

Well, we hope you never need to face any dispute. Still, you’re more likely to face at least a few disputes if you have a growing business dealing with thousands of online transactions. It’s better to take preventive measures to avoid disputes. No matter how hard you try, you can’t get rid of disputes completely as no business has 100%, satisfied customers. So, prepare your arsenal with the best weapons to fight payment disputes. We’re confident that you’ll win Stripe disputes if you follow this guide.

Md. Tanvir Faisal is a Technical Content Writer at Appsero with 4 years plus experience in Content Writing, Copywriting, Proofreading, and Editing. He focuses on writing informative content that draws social media attention and enhances search engine visibility. To date, he has successfully developed useful content for many websites across all formats.